It was not too long ago when NFL teams selected a running back high in the draft to be the “bell cow.” That back would not only be the headline of the team, but he would get a large amount of volume with little competition surrounding him. Nowadays, however, the league has shifted to a committee attack led by multiple ball carries.

The question remains, why is this the case?

To start, the running back position is arguably the one that faces the most punishment. Unfortunately, the amount of hits guys take mount up in a hurry. Therefore, they get injured much quicker.

Also, the position is not viewed as a premium position like it once was. In the past, teams would feature these high profiled guys and give them long-term contracts.

In the modern NFL, however, teams wait until the second or third round of the draft to take a back. Once their rookie contract ends after four seasons, the team either signs him to a short-term contract or often lets the running back walk in free agency for a cheaper/younger option.

The prototype for a running back has changed greatly as well. Unless you are Derrick Henry, teams look for smaller/shifty guys that can catch passes out of the backfield, such as Christian McCaffrey or Alvin Kamara.

Both McCaffrey and Kamara are used as hybrid backs/receivers, which helps teams utilize them in a bunch of different ways.

With all that being said, below is my top running back tandem in the NFL: 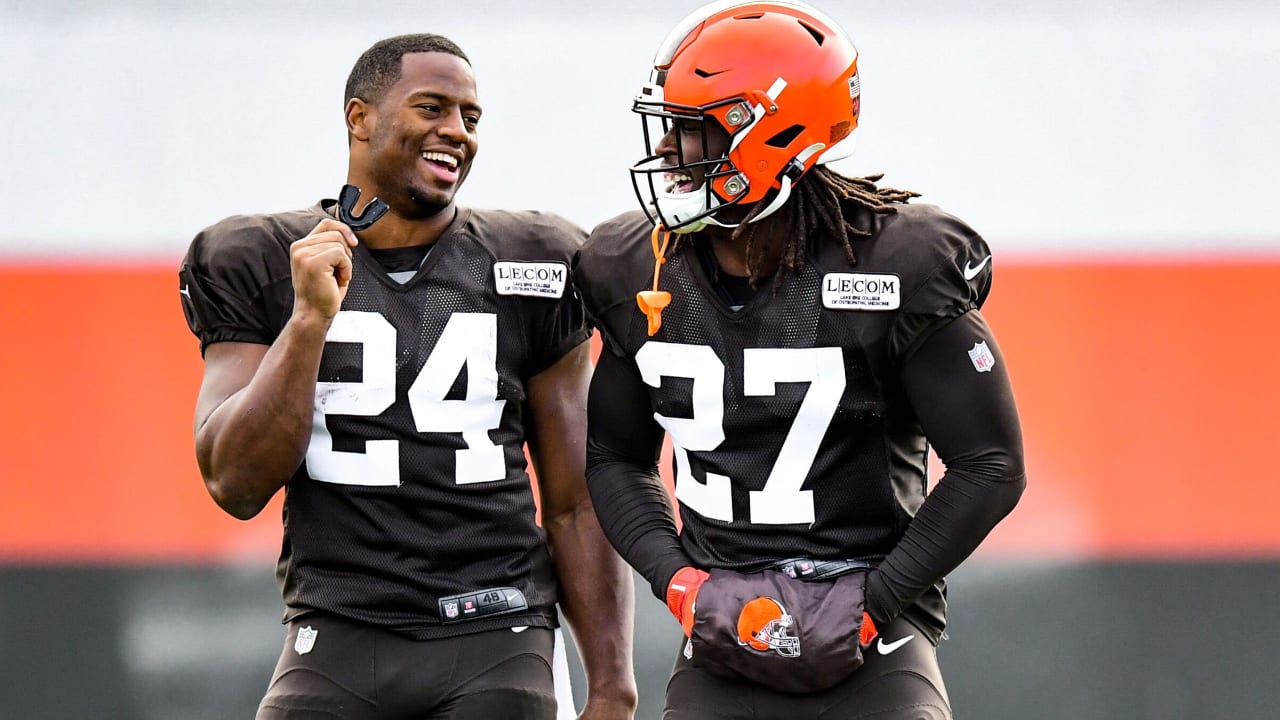 Nick Chubb and Kareem Hunt are the most talented running back duo in quite some time. Chubb’s vision and ability to run through the tackles is elite. Not to mention he does have blazing breakaway speed.

Hunt, in his own right, is an absolute bruiser who intimates NFL defenses as well. Not only can he run over guys, but he is a great pass catcher, too, which has helped quarterback Baker Mayfield immensely.

Last season, the Browns ranked third in total rushing yards, with Chubb averaging 5.6 yards a carry, while Hunt avenged 4.2 yards on the ground and 8 yards a reception.

In Kevin Stefanski’s first year at the helm, he emphasized the run right off the bat, which elevated Mayfield’s effectiveness. Just a year prior, in 2019, people were wondering if Baker was a bust under former coach Freddie Kitchens. After this season, however, that is clearly not the case.

In the postseason, Cleveland ran all over a talented Pittsburgh Steelers defense in the Wild Card round and nearly beat the Kansas City Chiefs as well the following week.

Because both Chubb and Hunt are great, the Browns offense does not lose a beat when either guy is on the sideline. Their running style compliments each other well, with Chubb being the early down back and Hunt being the primary third down guy.

If the Browns want to advance even further in the playoffs this year, they must continue to run the ball early and often.

About Ryan Ghodsian 9 Articles
Hello, my name is Ryan Ghodsian and I am a senior at the University of Miami from Los Angeles, California. I am a strongly motivated person who encourages others to be the best versions of themselves. It is extremely rewarding to collaborate with others and see the progress you are able to reach together. I enjoy the process of writing and am very open to constructive criticism in order to improve myself.

Hit The Panic Button On The Minnesota Vikings

The Minnesota Vikings have started their season with a 1-3 record. Although the Head Coach seems unbothered, fans are starting to worry.
[…]

Odell Beckham Jr. has been hot in the media for the past week due to his public issues with Cleveland Browns quarterback, Baker Mayfield. Beckham has now signed with the Los Angeles Rams and the question must be asked: Was it a good or bad signing? […]

Tim Tebow Needs to Know When to Stop

Tim Tebow is a Renaissance man, from college football quarterback to minor league baseball player, to trying (and failing) to make it in the NFL as a tight end. […]