Last season, the first season I began to write about sports, I wrote a column called the ¼ season awards and enjoyed seeing how it held up later in the season. I had Russell Wilson, then Aaron Rodgers for MVP and I stand by that choice.

But now, with the season being 17 games, there is not really an exact quarter mark, the closest I can get to is 4/18 which simplifies down to 2/9. So, my new tradition will now be writing 2/9th season awards (doesn’t roll off the tongue quite as nice, does it?).

This one is tough, as most early MVP races are. I think you can make a case for a handful of players: Kyler Murray, Matthew Stafford, Dak Prescott, and Patrick Mahomes.

However, Kyler has has three touchdowns rushing and 109 yards rushing, whereas Dak has zero and 54, which gave Kyler the edge and the 2/9th MVP. 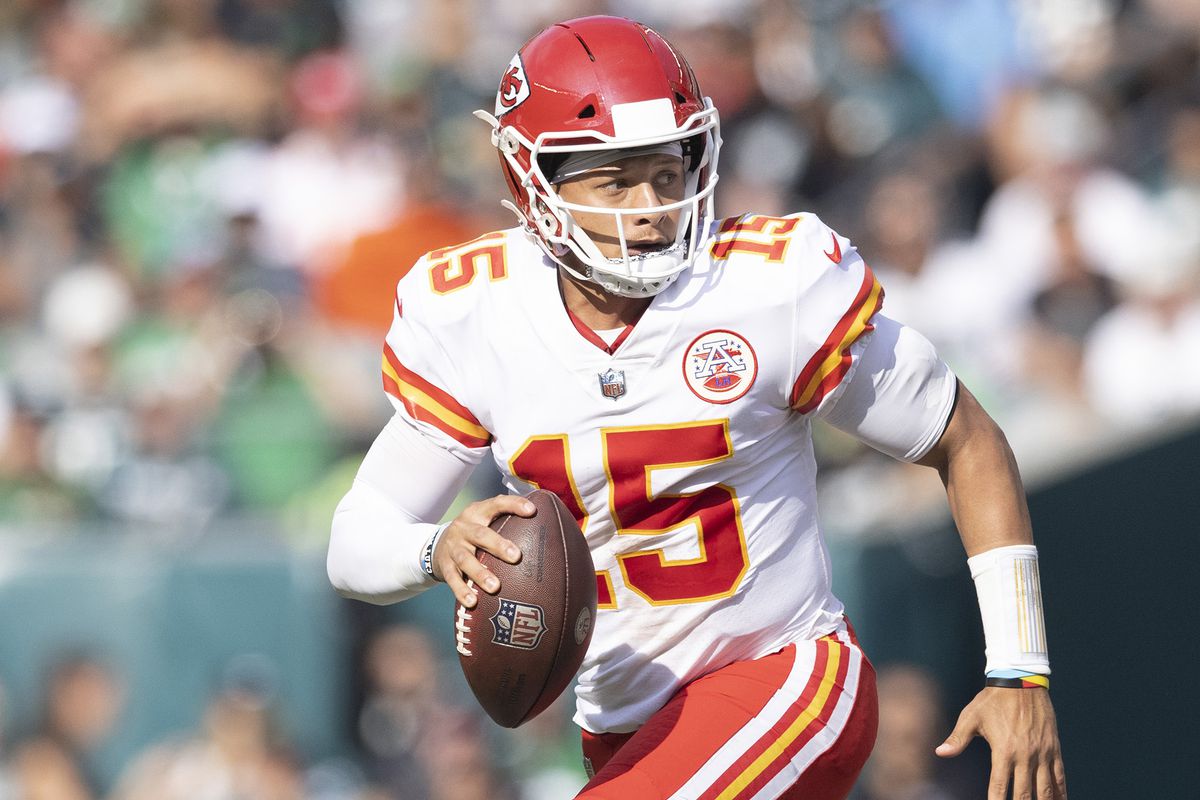 I am going with Cooper Kupp. Kupp leads the league in receiving touchdowns with five already through 4 games, and he is also second in receptions and third in yards. He is also doing this with a new QB and seems to have developed chemistry almost instantly.

In second is Deebo Samuel. Deebo is second because even though he leads the league in yards, he does only have 3 TDs and also has a fumble. However, anybody that leads the league as he does deserves to be in the conversation here.

In third, is Tyreek Hill because, unlike Cooper and Deebo, he doesn’t lead in any category, but he’s an outstanding balance of both. With 453 yards, he is an excellent balance between yards productivity and catching touchdowns.

Finally, we have Derrick Henry. I almost don’t want to put him here, but he is the heart and soul of the Titans and the only reason they are remotely competitive.

He leads the league in rushing yards, but he has 30 more rushing attempts than the number 2 guy, so he has a lot of yards, but he’s not very efficient.

Trevon Diggs has played incredibly well this season; he has a league-leading five interceptions. He only allows a completion percentage of 46% and enables a Quarterback Rating of 28. He also has eight passes defended and 26 tackles this season.

My only worry is that this does not feel sustainable: five interceptions over four games is an incredible clip. So as of right now, he is good and has earned first, but I am skeptical.

In second place is TJ Watt, and he is a little hard to compare to Trevon Diggs as he is more of a pass rusher. Watt has blitzed 11 times, netted five hurry-ups, has 3 QB knockdowns, and, more importantly, five sacks. He also has 13 pressures.

And unlike pretty much everyone else on this list, he has done this in only three games. I think that Watt has the better potential to sustain his pace, as he was incredibly close to winning the award last year and was only Aaron Donald being Aaron Donald away from being the defensive player of the year.

Myles Garrett is a candidate that I like more for the potential I think he has. He has a league-leading six sacks, but 4.5 of those were acquired during the Bears game. Much like TJ Watt, Garrett has forced three hurry-ups and 6 QB knockdowns. He also has 16 knockdowns and has 19 tackles.

Ja’marr Chase has to be my runaway candidate here. As a rookie, he averages 17.5 yards per reception and has acquired 4 TDs and 297 yards on only 17 receptions.
If you scale that up to the leading receiver, Davante Adams, with 31 receptions, it will equate to 542 yards and seven TDs through 4 games. He has been outstanding.

I am just going to say it. There is no outstanding skill-position candidate here. So, why not use the award to give some love to the big guys up front who make everything happen.

I love Josh Myers to win the award. The second-round pick for the Packers has a 96% pass block win rate, has been an anchor in the run game, and hasn’t allowed a sack this season through 257 snaps played. He also has not committed a single penalty so far.

Rashawn Slater was the second linemen taken this year and is second in the award race. Through 293 snaps, he also has not allowed a sack, has a pass block win rate of 87.8%, and has helped push the Chargers to become a much more efficient rushing team this season. He has committed one false start but other than that been very clean.

OT Penei Sewell is my final pick and still has a strong case. Sewell has had a pass block win rate of 85.7% through four games, and his only downfall has been penalties. He has already committed one hold and two false starts but has been an excellent talent in the league.

This one might feel like an out-of-the-box pick, but Asante Samuel is my DROY. He has two interceptions and has shut down opposing quarterbacks, forcing a passing completion % of 48% and a QBR or 35. He has also only allowed 87 yards.

Eric Stokes was not on my radar at the start of the season, but he has earned his way on here. He has only allowed a completion % of 50% and has an interception, and he has also allowed 97 yards.

I think he has the potential to move up on the list, but for now, Samuel is firmly in second.

Micah Parson is up here because he has 2.5 sacks and has performed well as a run stopper. His weakness is in his passing defense, as he has allowed a 75% completion percentage and has given up 101 yards which are a QBR of 99.7

Patrick Surtain II was my pick for DPOY of the year, but he has underperformed so far. He has allowed a completion % of 60%, only has one interception, and has allowed almost 200 yards. He has also allowed a QBR of 78.

This race is absolutely a two pony race. If CMC were not injured for the Dallas game and a good portion of the Texans game, I could see including him, but with CMC missing 1.5 games at a minimum and likely to miss at least a few more.

Therefore, I think this race does just come down to Dak Prescott and Joe Burrow.

Dak has an incredible case, he is in the MVP discussion after all. He has a 75.2% completion percentage with 10 TDs and 2 INTs.

He has gotten even more accurate, which feels crazy to say. His bad throw percentage went down from 15% to 11%, and his on-target rate increased to 79% from 77%. Dak is also delivering a faster ball; his pocket time went down from 2.5 seconds to 2.2 seconds. His passing TD% index went up from 94 to 121.

Joe Burrow, of course, is a pretty close second to Dak. He may not have the same stat line, he only has nine touchdowns and has four interceptions, but he does have a 73% completion percentage.

Joe Burrow has also gotten more accurate; his bad throw percentage went down from 13% to 11%, and his on-target numbers went up from 75% to 82%. Burrow has the resume to earn Comeback player of the year, and he and Dak also have the same record at 3-1. But I think that Dak has the better stat line, and his time is likely to have more continued success.

Sean McVay, Matt Nagy, and Kevin Stefanski. These three all won Coach of the Year in 2017, 2018, and 2020 respectively. All three of these coaches made the playoffs when they won this award, but more importantly, it was their first year as head coach of that team.

That is why for COTY, Brandon Staley wins the award. As of right now, his young Chargers are 3-1 and lead the AFC, featuring good wins over the Raiders and Chiefs and their only loss to the Cowboys.

Compared to last year, the defense has improved, and the Chargers’ offense has looked quite good. The most significant marker of change is when the Raiders scored 14 unanswered points in the second half. The past Chargers would fold that one up and let the Raiders get back into the game.

Instead, the Chargers forced a stop and scored to ice the game.

I would be seriously remiss if I did not mention the head coach of the undefeated Arizona Cardinals. Kliff Kingsbury was met with skepticism in his first season as the coach of the Cardinals.

He was under .500 in his collegiate career, and it felt like his only bragging points were the fact that he had the air raid offense and that he coached Patrick Mahomes at Texas Tech.

However, in his third season with Arizona, he now coaches a team that seems to be realizing his vision of the air raid in the NFL. If his Cardinals can continue their winning ways, there is no reason Kingsbury can not be COTY.

Zac Taylor is the third coach on my list, but he is not the least important by any means. Taylor has turned around the Bengals, going 2-14 in his first season, to then going 4-11-1, and now has a chance to tie his win total in just five games by leading the Bengals to 3-1, tied for control of the AFC North

Pittsburgh at #3 with the Bengals behind them in the back. Boy, has that been wrong.
[…]

Fantasy football is one of the most significant communities in the U.S having millions of players join leagues come football season. Many players of fantasy football often debate who are the best players to be a key addition to their team.
[…]