There were rumors circulating around the internet this week that Phil Jurkovec would be returning from injury to lead Boston College on Friday night. However, not everyone believed these speculations and it was unknown heading into warmups who would make the start.

Jurkovec went down in week two because of an injury to his throwing hand. The prognosis revealed that the junior would likely miss the remainder of the season. This was the plan according to medical personnel, but Jurkovec had other ideas.

The quarterback returned to the field in warmups for the Red Bandana Game, and at that point, there was no doubt he would be leading the Eagles against Virginia Tech. Jurkovec did just that, sparking his team to a 17-3 win at home.

Jurkovec underwent surgery following his week two injury. Most players would not be able to come back from this adversity, but Jurkovec’s rehab went well and it gave him a second chance in 2021. He took advantage of the opportunity on Friday completing 7 of 13 passes, for 112 yards, and rushing for 65 with a touchdown. The Eagles are now 5-4 after their first ACC victory against the Hokies. Coach Jeff Hafley said Jurkovec was cleared to play last Friday.

“I called him in and I would have said that’s a 50-50 chance with the amount of reps he was going to take. I didn’t want to do anything to jeopardize or get him hurt. We wanted to guide him, and he walked in and said: ‘I’m playing.”

The 6’5” quarterback took some shots on the first drive, and Hafley knew he had not missed a step since week two.

“We wouldn’t have let him play if we didn’t feel confident about him getting hit and getting hurt. Maybe part of me was concerned, but when I saw him bounce up and the look in his eye, we felt good about that.”

Pat Garwo added 116 yards on 30 carries, including a three-yard touchdown score for the team.

Virginia Tech looked like they stayed in Blacksburg on Friday. The Hokies were horrendous on offense, and they barely completed a pass throughout the game. Quarterback Braxton Burmeister left with an undisclosed injury in the first quarter which brought Knox Kadum into the game.

Virginia Tech head coach Justin Fuente was disappointed with his team’s effort. He will likely be looking for a new job following the season.

“We made basically no plays in the passing game. You have to play better on the road in an environment like that to deserve to win the game.”

Fuente was spot on with this analysis, especially on a night where Boston College was playing for more than a win. The team wore their red bandana uniforms to honor Eagles’ alumni Welles Crowther. 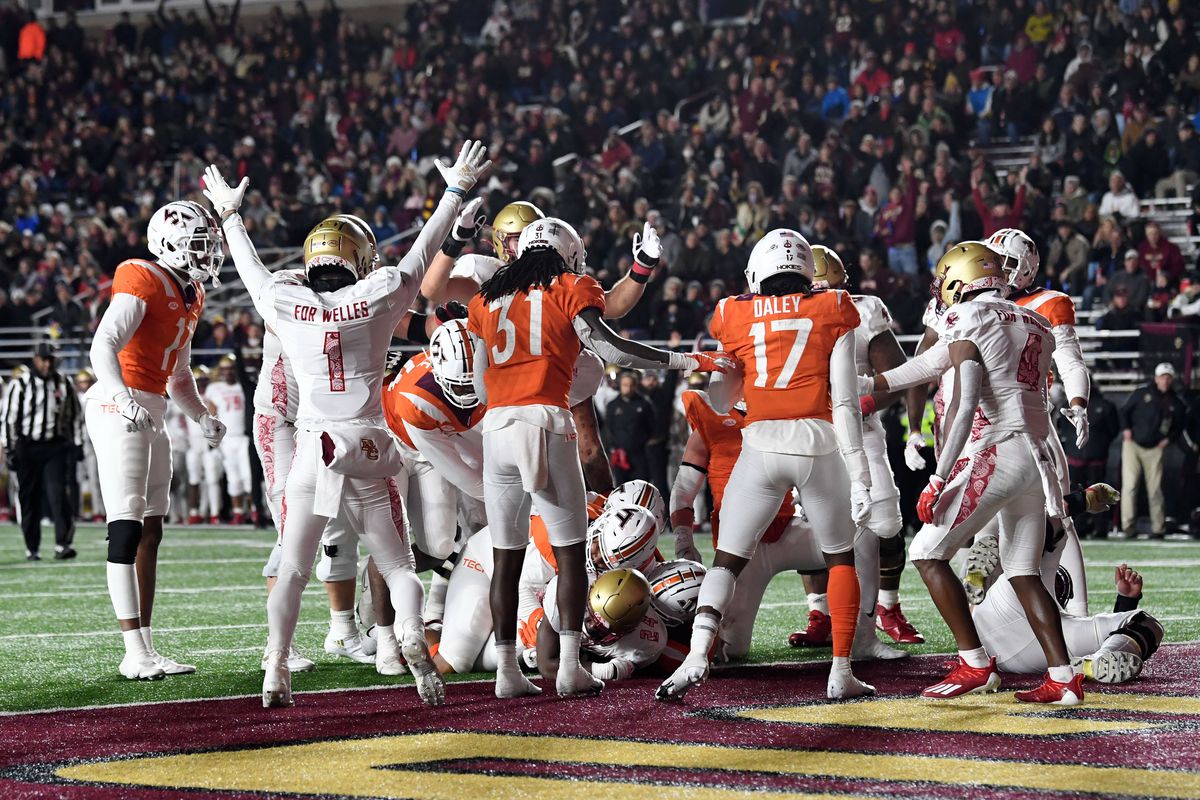 Crowther died in the September 11 attacks on the World Trade Center in an attempt to rescue as many victims as possible. He was identified by survivors through his red bandana.

Crowther’s team mentality on September 11 was evident throughout the Boston College sideline on Friday night. It all started with Jurkovec’s dedication to his teammates coming off the injury.

Jurkovec said, “I knew if I was going to come back that I couldn’t play tentatively. I said a few prayers and went out and did it. I ran out like I can. You can’t run without confidence.”

Boston College will travel to Georgia Tech next weekend and Virginia Tech will host Duke.

Why Ohio State Will Win The National Championship

The Ohio State Buckeyes are the best team in college football. Read this article to see why John Pearson will win this season’s national championship.
[…]

College football brings a more personal and exciting experience to the audience. It’s more exciting than the NFL in many different ways. […]