Football is undoubtedly the greatest game in the world for multiple reasons. The lessons and camaraderie you receive strapping on the pads make the game invaluable to any person’s development.

Within football, some people go above and beyond to make the game the greatest in the world. These people are defined as “Football Guys.” Football Guys come in various shapes and sizes, but they all represent the game better than anyone else in the world.

Football Takes is meant to showcase why there is no better game than the one played on gridiron. Therefore, it’s our responsibility to highlight the crop of Football Guys throughout the sport.

The first edition of Football Guy of the Week goes to Georgia State head coach Shawn Elliott. If you picture what a Football Guy looks like, it’s the leader of the Panthers.

Why Did Shawn Elliott Win This Week?

Shawn Elliott has been known for unmatched passion with his players, and a clip surfaced that demonstrated this fact before Saturday’s game. Elliott was seen greeting his players in warmups, as many coaches do before kickoff.

Most coaches give their players a high five and say something like, “Let’s go to work,” but not Elliott. The Georgia State leader gets his players ready for war long before kickoff by engaging in pushing matches to get his boys ready for battle.

Elliott is 48 years old, and he still looks like he could kick all of his players’ asses. This was evident in the clip from Twitter. Also, I cannot forget to mention that the coach tore his bicep celebrating a touchdown in 2018. #FootballGuy

Georgia State was going into a game against UNC that they could not win, but this did not mean Coach Elliott left his passion in the locker room. Awarding him with the Football Guy of the Week was an easy decision following the weekend slate.

Elliott has been leading the Georgia State program since 2017 after eight seasons at South Carolina as an assistant coach. He played at Appalachian State from 1992-1995 as a defensive end.

He started his coaching career with the Mountaineers as a graduate assistant in 1997 and ultimately led the offensive line from 2001 to 2009. He is 22-37 at Georgia State, but the coach has made three bowl games, earning two wins. 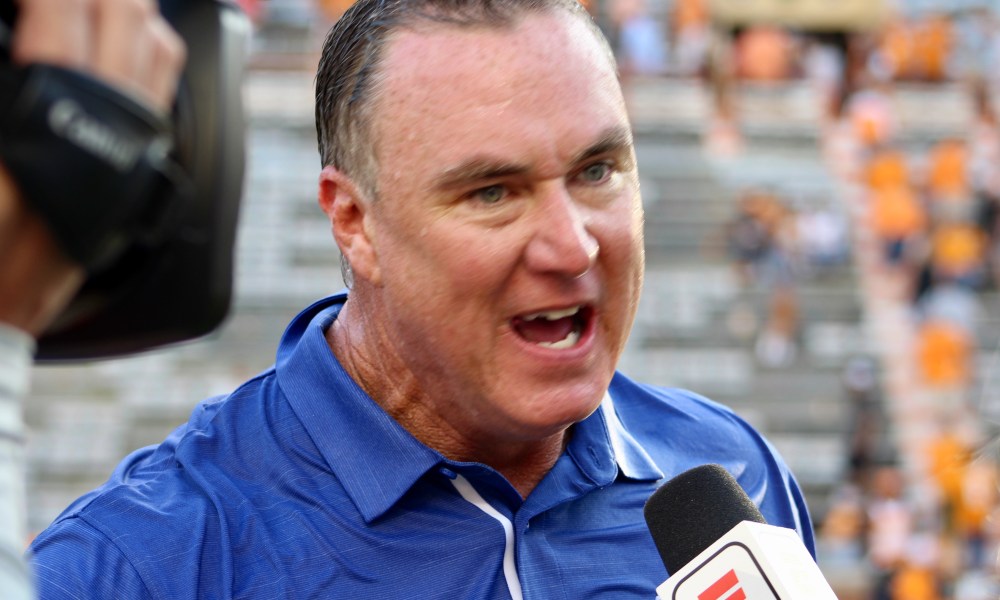 Look for Shawn Elliott to be a multi-time award winner, especially if Georgia State earns a big win. If his warmup routine is any indication of his postgame speech, it’s going to be epic.